Fun With a Hearse

Years ago a car rally used to run from the Big Apple (New York) to the Big Easy (New Orleans) and it was known as the BABE rally.  The rules were simple, the main one being that your car should not cost more than $500.

My wife and her friends set their team name to the "Helllcats" as an all woman team and I thought it would be fun to find them a hearse.  Now cheap hearses are not easy to find, but find one I did, in Las Vegas of course, a mere 1,500 miles or so from Houston.  Here she is, still in Las Vegas: 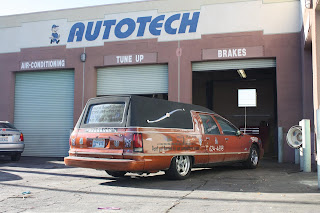 Unfortunately it broke down in Vegas, then again in New Mexico, so we towed it home to Houston: 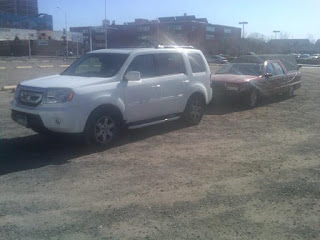 We then set about fixing it and I quickly learned something interesting.  I was working inside the back of the hearse.  There was a partition behind the driver area, two rear passenger doors and the back door.  The two rear passenger doors and the main back door did not have handles on them, as passengers back there would normally not be expected to leave; so here I was locked in the back of a hearse with no easy way to get out.  Fortunately I had my phone with me. 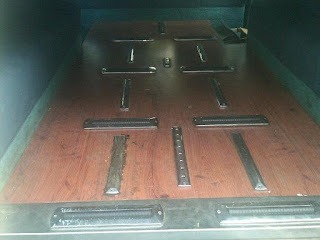 The problem which sidelined us in New Mexico was that the exhaust was rubbing on the plastic fuel tank and eventually burned a hole through the tank.  Back in Houston we bought an entire spare Buick Roadmaster (which once belonged to the cousin of Carrol Shelby), removed the fuel tank, the bits which held the exhaust correctly in place and the shields which had rusted off the original, but basically were there to stop the exhaust rubbing on the tank.  I cut out most of the rear platform for holding the coffins and installed a rear seat from our donor car. 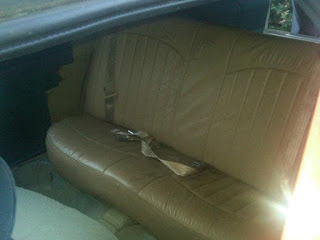 The door cards in the back were modifed with handles so the passengers could get out: 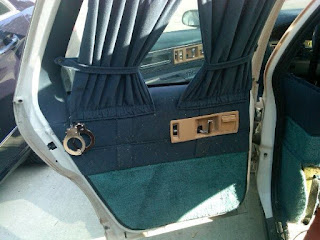 The car was ready and was driven to New York!  A cheap room was secured at the Waldorf Astoria and our beautiful hearse delighted the valet parkers: 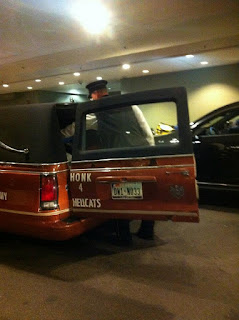 The car then made the rally from New York to New Orleans with only a few minor issues.  In fact it did so well we took it on the rally again the next year.  We drove it on the "Tail of the Dragon" a road on the Tennessee/North Carolina border synonymous with car and bike enthusiasts, we even made the weekly cover photo of the famed photographer, KillBoy: 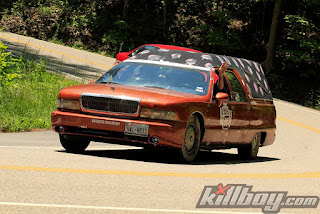 Some people would refuse to get in it, others thought it was just the funniest thing ever and this really corresponds with how people think about death.  Some people are comfortable with thinking about it, whilst others want to avoid it and anything to do with it.  As with anything, the better prepared we are, the better it is.  Get wills prepared early and then think about what else you can do - I have blogged a checklist which you can refer to.  Using our service, GoneNotGone.com we take away some of the finality of death by allowing you to send messages and remain a part of a loved ones life after you have left.  It is simple, reasonable, and could mean the world to those left behind.

Sign up today, before it is too late.  Then find adventures, like we did with our hearse, as life is for living!
Posted by Unknown at 10:39 AM No comments: